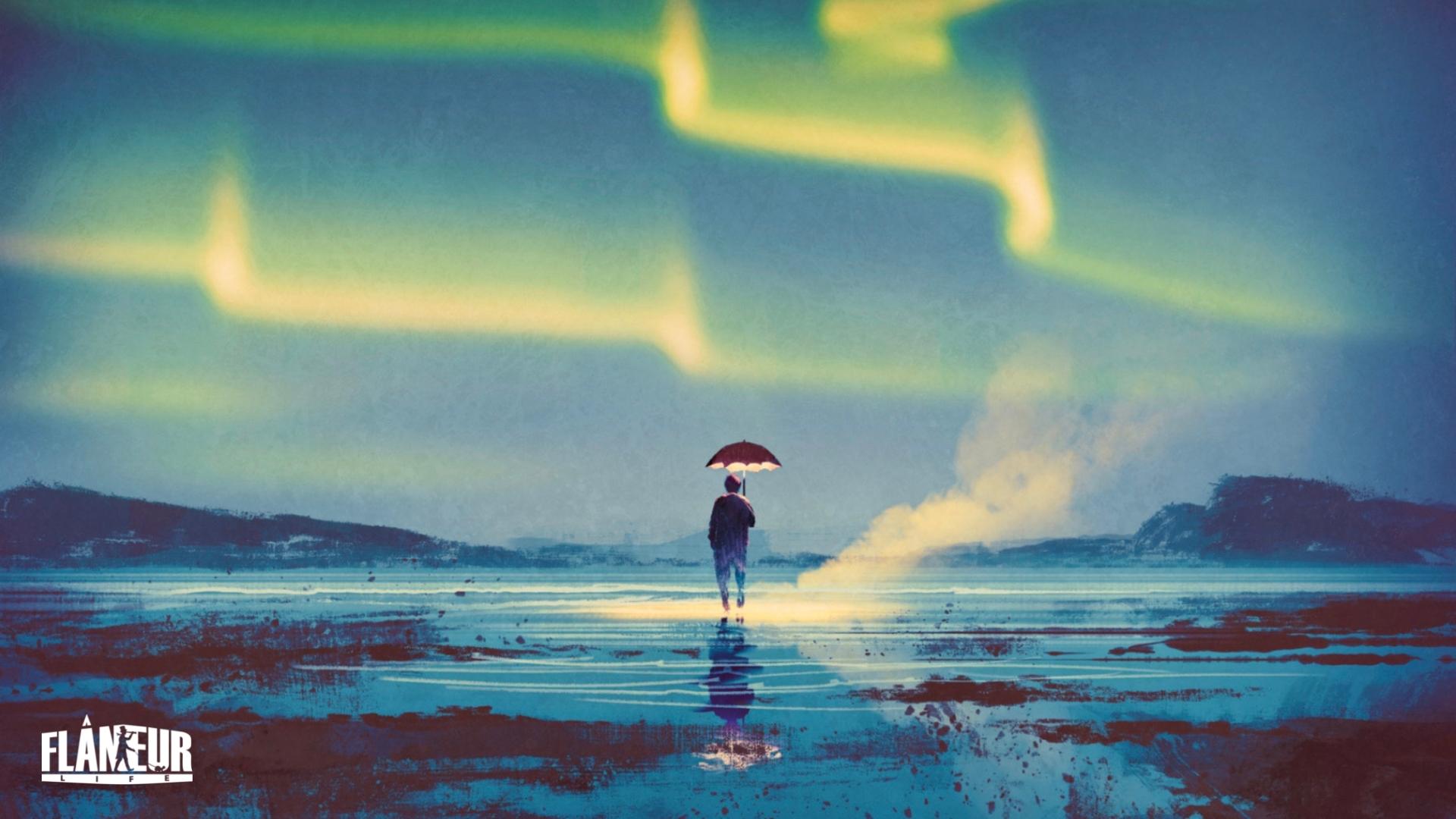 The best epiphany I’ve ever experienced is summed up well by this quote from the film Waking Life: “When it was over, all I could think about was how this entire notion of oneself, what we are, is just this logical structure, a place to momentarily house all the abstractions. It was a time to become conscious, to give form and coherence to the mystery, and I had been a part of that. It was a gift. Life was raging all around me and every moment was magical. I loved all the people, dealing with all the contradictory impulses – that’s what I loved the most, connecting with the people. Looking back, that’s all that really mattered.” Here’s a curated list of epiphany quotes to help you ponder life.

By an epiphany he meant a sudden spiritual manifestation, whether in vulgarity of speech or of gesture or in a memorable phase of the mind itself.

Without the quest, there can be no epiphany.

Every moment an epiphany arrives and cleaves the mountain asunder.

Love is the epiphany of God in our poverty.

Perhaps the journey towards epiphany is an unseen, steady process towards understanding. Likened to a combination safe, as you scroll the dial towards the inevitable correct combination you cannot tangibly see your progress.

Becoming is not a contradiction of being but the epiphany of being.

It’s a rare gift to understand that your life is wondrous, and that it won’t last forever.

Gratitude bestows reverence, allowing us to encounter everyday epiphanies, those transcendent moments of awe that change forever how we experience life and the world.

With realization of one’s own potential and self-confidence in one’s ability, one can build a better world.

The inspiration can come in such small ways that if you sit there just waiting for the big epiphany you’ll sit there for the rest of your life.

Naturally we would prefer seven epiphanies a day and an earth not so apparently devoid of angels.

The epiphany was simply tucked away for consideration after we were back on campus. Sometimes a revelation comes with a flash of heavenly light and a booming voice and sometimes it is jotted in a sun-bleached spiral notebook.

I never made one of my discoveries through the process of rational thinking.

If you look throughout human history the central epiphany of every religious tradition always occurs in the wilderness.

There’s nothing better when something comes and hits you and you think ‘YES’!

By an epiphany he meant a sudden spiritual manifestation, whether in the vulgarity of speech or of gesture or memorable phrase of the mind itself. He believed it was for the man of letters to record these epiphanies with extreme care (saving them for later use, that is), seeing that they themselves are the most delicate and evanescent of moments.

If you look throughout human history … the central epiphany of every religious tradition always occurs in the wilderness.

Nature poets can’t walk across the backyard without tripping over an epiphany.

All art is a gift. It is first of all a gift that the maker can do it. It is then a gift to someone else, whether they pay for it or not. The wonder of it is that we cannot get the production of these gifts stopped. Art is life seeking itself. It is our intractable expressions of love for the beauties, ideas and epiphanies we regularly find. I framed the painting. It’s now hanging in our den. “I have walked this earth for 30 years, and, out of gratitude, want to leave some souvenir.

Those who are waiting for an epiphany to strike may wait forever. The artist simply goes to work, making art, both good and not so good.

In reality, genuine epiphanies are extremely rare. In contemporary adult life maturation & acquiescence to reality are gradual processes. Modern usage usually deploys epiphany as a metaphor. It is usually only in dramatic representations, religious iconography, and the ‘magical thinking’ of children that insight is compressed to a sudden blinding flash.

It had come to me not in a sudden epiphany but with a gradual sureness, a sense of meaning like a sense of place. When you give yourself to places, they give you yourself back; the more one comes to know them, the more one seeds them with the invisible crop of memories and associations that will be waiting for you when you come back, while new places offer up new thoughts, new possibilities. Exploring the world is one of the best ways of exploring the mind, and walking travels both terrains.

Change is an action not just an epiphany!

The camera is my means to internalize those fleeting epiphanies that I was having in my life.

People have moments of consciousness and epiphanies throughout their lives, but then suppress the realization.

This is an epiphany moment, I can either sink or swim.

The epiphany I had in my career in randomness came when I understood that I was not intelligent enough, nor strong enough, to even try to fight my emotions.

A great epiphany: I found out that I’m totally confused and I’m good with that. I’m consistently inconsistent. I’m all of the above. I’m OK. I’m a work in progress. That’s my next tattoo somewhere.

The epiphany was simply tucked away for consideration after we were back on campus. Sometimes a revelation comes with a flash of heavenly light and a booming voice – and sometimes it is jotted in a sun-bleached spiral notebook.

The notion of a contemporary epiphany to me is very exciting, because it’s a sort of biblical thing. It’s something that has happened to people in other centuries or in the context of religious experience.

The music is happy; the laughter is happy. Everything feels ecstatic and desperate. Blurrily, I think of sex, and I think of death. I realize: Every moment of joyous celebration contains the seed of death.

I entered the water as naked as when my mother bore me. When I first touched the cold water I felt a shudder go through me, then the shudder was transformed into a sensation of wakefulness.

An artist’s duty is rather to stay open-minded and in a state where he can receive information and inspiration. You always have to be ready for that little artistic Epiphany.

I had the epiphany that laughter was light, and light was laughter, and that this was the secret of the universe.

What I did not realize was that I also hoped to have an epiphany, to discover a cause to devote my life to, a location where I thrived, a man to love, a life that would give me more fulfillment than the meager amount I had been living on for years.

Every moment an epiphany arrives, and cleaves the mountain asunder.

It was an epiphany when I realized you don’t have to call yourself a linguist, a translator, a poet. You can call yourself an artist and you can do all these things.

In retrospect, I would have to recommend against epiphanies. They are difficult on an emotional level, and they also sometimes move you to foolish and inopportune acts, which was what happened in my case.

I always liked those moments of epiphany, when you have the next destination.

Evidently, I’d suffered an epiphany: the subconscious realization that when it comes to coolness, nothing the human race has ever invented is more cool than a book.

Fame is an epiphany of bubbles that are transient and pugnacious. Debasish Mridha

Instead of swinging back and forth between individual points of truth, each piece we learn should build upon another to bring us closer to the full truth.

I think the biggest shift has been in realizing how much more we are creating our life than we realize. That was sort of the epiphany to me.

I suddenly had a little epiphany: all the books we own, both read and unread, are the fullest expression of self we have at our disposal.

Day creeps after day, each full of facts…And presently the aroused intellect finds…that a fact is an epiphany of God, that on every fact of his life he should rear a temple of wonder and joy.  Ralph Waldo Emerson

The magic of the street is the mingling of the errand and the epiphany.

Discovering your calling is not an epiphany but a series of intentional decisions. It looks less like a giant leap and more like building a bridge.

Truth is always a turning point.

For me, the short story is not a character sketch, a mouse trap, an epiphany, a slice of suburban life. It is the flowering of a symbol center. It is a poem grafted onto sturdier stock.

Have any other epiphany quotes you’d add to the list? Which is your favorite? Leave a comment below.